How To Record Android And iOS Game Videos Easily

I’m an avid mobile gamer, I install almost all the popular games on my tablet and play them. Gaming is something that helps me to move away from work stress. Sometimes you spend a week or a month and complete a game successfully, but don’t you want to show off your finishing move to your friends and enemies? Do you? Then there is an easy way for this. 😉

This app is new for Android users but it is already available for iOS users. But at the moment I don’t have an iOS device, so I’m going to share the procedure for Android devices since the steps are almost the same.

If your Android device is using Lollipop version (or above) then you can record Android game videos easily without rooting the device. Thanks to Kamcord things are now much easier!

1. Download and install Kamcord app if you haven’t. So, before proceeding there is only one drawback with this app, you can’t use this app for all the games available in Google Play store. But it does work well for majority of the popular and trending games, which they display in their app. So you need to digest this and use the app.

After installing, you can either signup or skip the procedure, then you can see the list of games they support for recording. Most probably you’ll find all the popular games which are compatible for recording. I picked my all-time favourite “Subway Surfers” for trying this app. 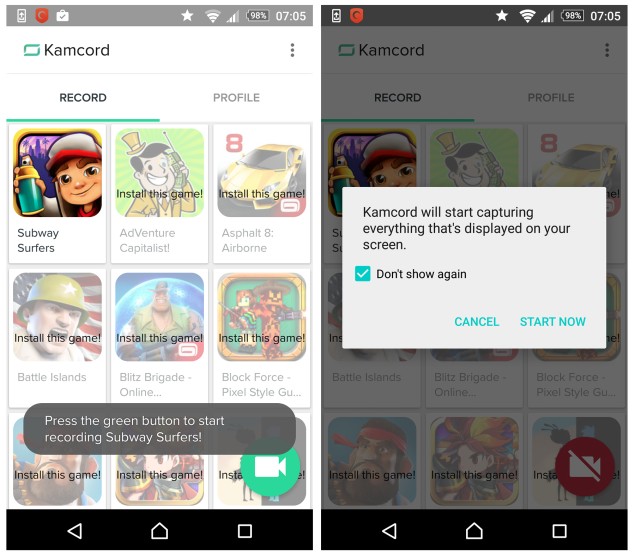 After choosing the game, press the green recording icon at the bottom right. That’s it. Now the game will be opened and you can start playing. If you have a good Android device (which has Lollipop or higher) then you won’t find any lags or any issues while playing the game.

After completing the game you can exit the game, go to the Kamcord app and stop the recording. Now you’ll be taken to this (below) section where you can play the recorded video and you can also share them with your friends by uploading it to your profile. 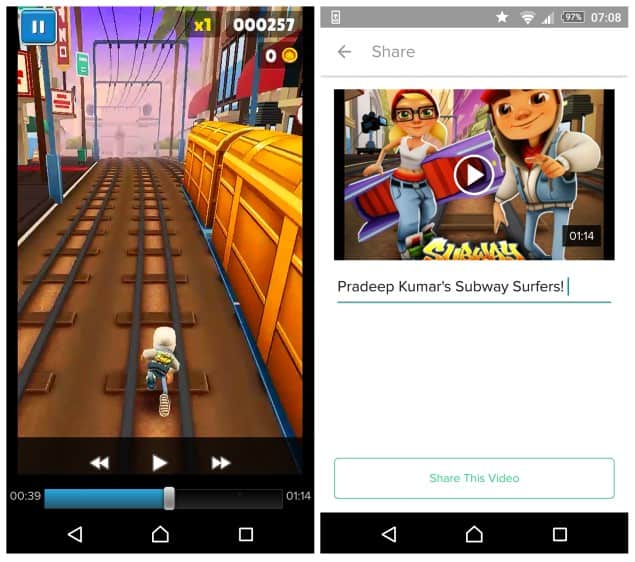 Kamcord is using the video capture API which Google introduced on their Android Lollipop version, so it’s easy for them to implement this to normal users without rooting their device (phone/tablet).

Kamcord is already available for iOS and it is extremely popular with iOS gamers. Do check this out and let us know your views in the comments below.

PREVIOUS
ASUS Pen Stick: A Mini PC Powered By Windows 10
NEXT
Speed Up Chrome For Android With This Simple Tip

Pradeep Kumar
Author
Website
I’m the CEO & Founder of Slashsquare, an Indian Blog Network & Web Consulting Media. I’m a Blogger, an Internet Marketer, and a Minimalist. DeviceBAR is a part of Slashsquare network.
Other Interesting Articles From Android
5+ Best Must Have Android Security Apps
Google Android M’s Easter Egg Is ¯\_(ツ)_/¯
This Simple Google Maps Tip Can Help You Find Your Lost Or Stolen Android Device
Google Is Building A New Version Of Android Called “Brillo” For Internet Of Things
Simple Tip To Reduce Lag And Speed Up Android Devices